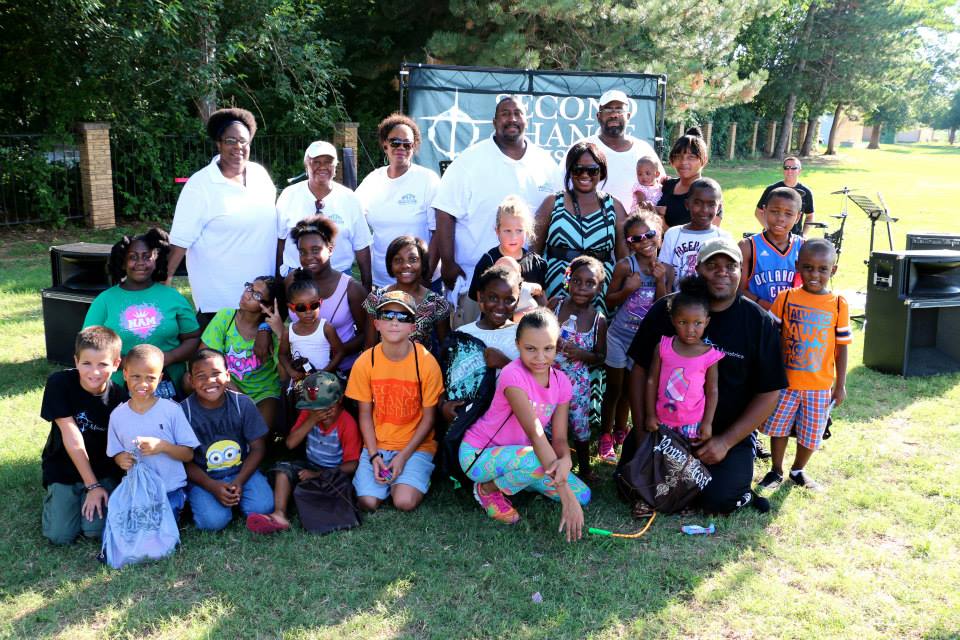 On September 25, 1986 – a meeting was held at the home of Rev. and Sis. Water Preston, for the purpose of organizing a new church. At this meeting 8 person attended and after prayer decided to organize a new church under the name Shield of Faith Missionary Baptist Church. It was during this meeting that Rev. Water Preston stressed the importance of everyone tithing to help accomplish the work of the church. In order to organize three letters were necessary. The letters were received from Mr. And Mrs. Boatwright, Mrs. Ella Horton, Sis Mary Preston, and Sis. Brenda Sellers.

On October 20, 1986 – services were held at Faith Memorial Baptist Church and hosted by Pastor Curry. The purpose of this service was to formally organize the church. Serving as moderator was Rev. Dewitt Roland pastor of St. Luke Baptist Church and Secretary of the National Baptist Convention of Oklahoma. The roster of ministers in attendance were,

It was at this service that the original Constitution and by-laws were adopted, and Rev. Walter Preston begun his Pastorate with Shield of Faith Missionary Baptist Church. Additional members were added to the church during this service (13 letters, 9 by Christian experience, 4 as candidates for baptism). Also, the first election of officers was accomplished during this meeting.

Sunday services were held with the Union Baptist Church and Pastor Kelly Booker until November 23, 1986. Rev. Charles Roland officially accepted the call, to be the Assistant to the Pastor on November 23, 1986.Then services were moved to the Lincoln Plaza Hotel until December 28, 1986. The first service (Prayer meeting) held at storefront rental property, located at 1917 N. Lottie, on December 31, 1986. The first Sunday Worship service was held in the rental property on January 4, 1987, with a communion tray borrowed from Avery Chapel A.M.E. Church. The first baptisms were held in March of 1987 at the Union Baptist Church.

Pastor Preston announced his retirement from the pastorate on January 24, 1990. The church elected Rev. Charles Roland to serve as Interim Pastor and he officially became pastor on March 1, 1990. Under Pastor Roland’s leadership the first Revival Services were held with Rev. Jerome Roland as the guest Evangelist. In March of 1992 Rev. Juan Barrientez, Sr. was called as Assistant Pastor. Rev. Juan Barrientez, Sr. and Rev Vance Roland were ordained into “The Gospel Ministry” October 31, 1993. In 1993 a new van was purchased for the church. Also, in August of 1993 property was purchased at Wilshire and Kelly Place in the Musgrave Gold Medals addition. On April 7, 1996, Rev. Roland announced his intent to resign as Pastor, and on May 26, he preached his farewell Sermon. After the service, Sis. Kay Hamilton stated that the church should not be without an official head and made a motion that Rev. Juan Barrientez, Sr. serve as Interim Pastor. This motion was second by Rev. Roland and unanimously voted on by the church.

Rev. Juan Barrientez, Sr. began teaching on I and II Timothy and concluded with the church by-laws and guidelines. Interim Pastor Barrientez headed the search for a new pastor, which would eventually lead to himself. Where as he accepted the call to be the 3rd Pastor of Shield of Faith MBC on December 15, 1996. In December of 1997 Shield of Faith MBC began Worshiping in our current location (1134 NE 20th, OKC, OK 73111).

On August 9, 1998, Minister Carol Wilson preached her first message and was license into “The Gospel Ministry”. Her text was from Hebrews 12:1, Philippians 4:8, 11- and titled – “From the Dugout to a Prepared Place For a Prepared People”. On August 12, 2001, Shield of Faith ordained its first deacons (Deacon Thomas Johnson, Deacon Juan P. Barrientez, II, and Deacon Jason Barrientez). Also, under the leadership of Rev Juan Barrientez, Sr. the church updated its constitution and by-laws in 2002. On November 3, 2002 Rev. Juan P. Barrientez, II preached his licensing message and was licensed into “The Gospel Ministry”. His text was Romans 12:2 and titled “A Lifestyle of Repentance”.

Shield of Faith Missionary Baptist Church embarked on the opportunity to begin building equity in the property occupied, by going from renters to purchasers. On May 23, 2003, Shield of Faith MBC closed on the purchase of our current location (1134 NE 20th, OKC, OK 73111), and began a remodeling phase which included,

Rev. Juan P. Barrientez II (Pastor Juan) was elected to serve as the forth pastor of Shield of Faith Baptist Church on May 26, 2010 exactly 14 years after his father was elected to serve as interim pastor. Pastor Juan immediately began to seek the Lord on the direction of the Church under his tenor. He unveiled the vision, mission, and core values in July 2010. It is his desire to see Shield of Faith Baptist Church become a model small church, emphasizing that we can do all things through Christ Jesus.

Pastor Juan embraces the use of technology including audio/video, power point, and the world wide web. He also believes in doing ministry out of the box to reach a new generation. Some of the new implementations and plan include: